The Great Gorges of the Kimberley: Why You Should Tick These Off Your Bucket List 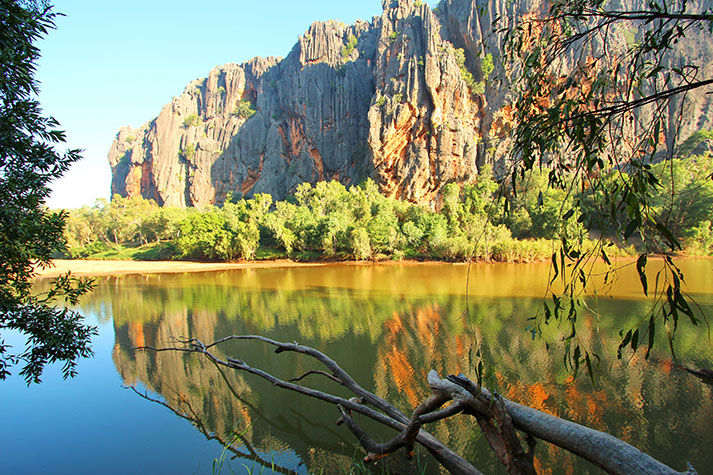 21 Oct The Great Gorges of the Kimberley: Why You Should Tick These Off Your Bucket List

Posted at 17:04h in Uncategorized by Ross Quigly
0 Likes

Thronged along the Kimberley region’s stunning peaks and river inlets stand magnificent inland rock walls, lined with multicoloured strata and filled by crystal clear water. The gorges of the Kimberley are are one of the major highlights of the region, and among Australia’s top tourist destinations.

There’s quite a few gorges throughout the surrounding terrain, and quite a few ways to tackle them. Bush explorers will be lured by the thrill of the Gibb River Road 4-wheel drive adventure, while anybody seeking a more relaxing view may choose to take us up on one of our cruises through the Kimberley (check out our current deals on Kimberley cruises here).

No matter the size, shape, or adrenalin-seeking level of your group, we firmly believe that everybody should take the opportunity to cross a trip to the Kimberley gorges off of their bucket list.

If you’ve ever wondered just how the rock walls lining the canyon got their lustre, the answer might surprise you with its beauty and complexity.

The Kimberley region once sat completely submerged beneath water (we’re talking over 300 million years ago!), which, over time, built up a huge pile of different sand, rocks, and fossil life.

Once the water levels dropped in the region, we were left with now towering pillars of intricately layered sandstone, inset with thousands of tiny fossils and other remnants of the past.

Over a huge period of time, streams of water found inroads and erosion lines within the relatively soft sandstone rock, and carved deep trenches into the land. The resulting formations that we see nowadays are a direct result of this process, and a testament to the sheer power of nature.

The end result is breathtakingly stunning, and the slow erosion process means that there’s plenty of fantastic naturally occurring rock formations, waterfalls, and tiny inland lakes and ponds that support a plethora of animal and plant life.

It takes a long time to make something this fantastic!

If you’re more interested in the experience than the history, rest assured that the walls aren’t the only interesting thing.

Taking a trip around the Kimberley gorges will allow you to appreciate the deep blue water of the region, and bask in the great Australian countryside. There’s birdsong in the air and fish in the water, and a new waterfall or rock pool outcrop around each new turn.

Standing from the bottom of Windjana Gorge, you’ll get a true feeling for the majesty of the gigantic rock forms, and an appreciation for the shaping power of nature. The rock around you towers hugely overhead, providing a characteristically Australian ochre-red backdrop to the fantastic waters.

Travelling by water, you’ll be able to see bream and archerfish playing in the waters – you might even be able to land one or two big ones from the designated fishing spots scattered around. Or why not give crabbing a go? Failing that, you’re just as well to relax, sit back, and enjoy the bright Aussie sun playing off the surface of the waters.

One of the best things about the Kimberley is the sheer magnitude of the flora and fauna. The Mitchell River and surrounding smaller rivers in particular hold host to a fantastic array of creatures.

You’ll be able to spot Australian birdlife on any trip around the area. From the sheen of the bright blue dollarbird, to the multi-coloured northern rosella, or the yellow-covered face of the Masked Lapwing, there’s enough to please even the harshest ornithologist.

If winged isn’t your style, then dip below the surface of the water. First and foremost, you’ll find a thriving population of freshwater crocs. If you’ve wondered why the Kimberley has an emphasis on designated swimming areas, look no further than this. Generally though, you’ll find them basking lazily under the sunlight.

On top of that, sport fishers usually perk up their ears when they hear about the gigantic barramundi (which can easily grow over a metre, and almost up to two!), salmon, mangrove jack, bluebone and many more.

Anybody who’d rather just look than catch will find these equally stunning, but be on the lookout for a few region favorites like the archerfish (which shoots a jet of water to stun bugs and other prey before catching it).

Finally, there’s an assortment of the regular Aussie culprits hanging around. You’ll see kangaroos, emus, wallabies, flying foxes, and maybe even catch a glimpse of an elusive echidna or platypus.

Take the gorges in style

For anybody looking to experience these natural wonders in total relaxation, Kimberley Cruise Escapes offers a 6 night gorge cruise, heading North to South (or the reverse) across Wyndham and the Mitchell Plateau.

You’ll visit Kununurra and crest the Mitchell Falls, have the option of fishing your lunch on the Mitchell River, wonder in awe at the gigantic, cathedral-like doors of the King George River gorges, and take in all the wonders of the rivers and gorges from the comfort of a luxury cruise liner. Plus, you’ll get to experience the Northern Kimberley from the air on a charter flight across the region, as well as a helicopter flight over the Mitchell Falls!

If that sounds like your cup of tea, you can read more about it here. Positions fill up quick when the holiday season starts rolling around, so give us a call on 1300 278 473 to book.