A Guide to Local Wildlife in the Kimberley 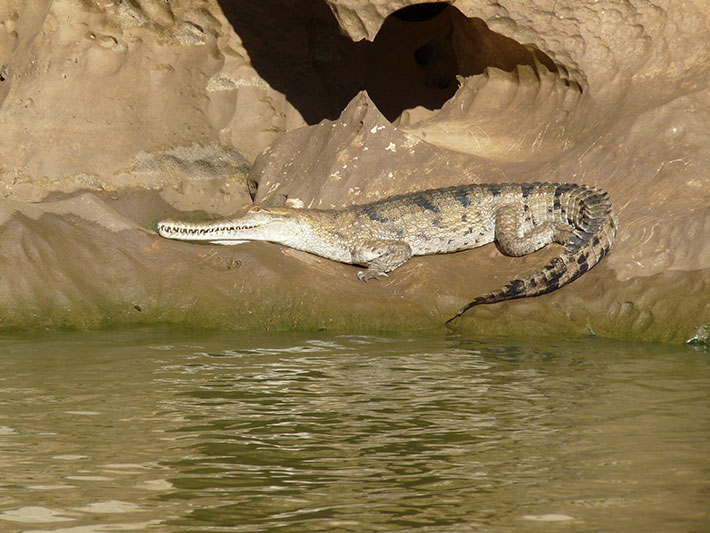 12 Jan A Guide to Local Wildlife in the Kimberley

Posted at 01:28h in Uncategorized by Ross Quigly
0 Likes

One of the most exciting reasons our passengers visit the Kimberleys is to get a glimpse of the brightly coloured and diverse wildlife that make their homes in the region.

From the huge amount of tropical birds that sweep across the landscape, to fish and crocodiles surging through the crystal clear waters, not to mention the native Australian reptile and mammal life that live among the scrub and bushland, the Kimberleys represents one of the largest and most breathtaking animal ecosystems in the Southern Hemisphere.

While you’ll be able to see a lot of the native wildlife population by simply keeping your eyes peeled, it’s handy to know where to look if you want a glimpse of a specific species. After all, there are hundreds of different plants, animals, and birds to keep track of, and some of our most popular denizens can be mighty elusive if you don’t have a guide.

The kangaroos of the Kimberley are some of our largest, most popular and easy to find creatures. It’s not uncommon to wake up from camping to find them huddling around tents or hopping around in the nearby bushland, and you’re bound to spot a few when you’re here.

There are nine species of kangaroo and wallaby that make their home in our region. The smallest, and hardest to spot, is the Monjon, which looks like a cross between its larger cousins and a squirrel, and only grows to a maximum of 35 centimetres from head to body.

By comparison, the huge Red Kangaroo is a little easier to spot, growing up to a huge 1.5 metres tall, with a further 60-100 centimetres of tail to go!

While a lot of the smaller wallabies are nocturnal, taking advantage of less predators to do their foraging in the cool dark hours, you’ll be able to see them in the early morning and dusk as they leave their cave habitats.

There isn’t much in the wild that can pose a serious threat to a Red Kangaroo though, so if you’re lucky, you’ll come across some of the larger, bolder specimens in the middle of the day, grazing on plant life and hopping along on their way.

The Kimberley houses some of the greatest views in the world for birdwatching, with over five hundred distinct bird species found in the state.

You’ll see bird representatives from the huge diversity of ecosystems on display across the Kimberleys: Emus and Magpies strut around the scrubland by day, while Herons, Waterfowl, Boobies, Kookaburras and various wading birds (just to name a couple) make their homes in the watery plains and canyons that throng the region.

If you’re looking for a splash of colour, our parrot population is as stunning as it is huge: the green and red plumage of the Red-Winged Parrot, the multicoloured dazzling display of the Rainbow Lorikeet, and the muted yellows and vibrant blues of the Northern Rosella are only a couple of the magnificent sights on display.

If you’re looking for a specific guide on where to go for the best bird watching, you can check out our own bird watching guide, or take a trip on our own Oceanic Discoverer to cruise down from Broome to Darwin, a region designated as an Important Bird Area by BirdLife International.

We’re extremely lucky in Australia to be one of the few places in the world that regularly experiences migrations of whale pods throughout the year. The Kimberleys in particular house the world’s largest annual Humpback Whale population from June to October, though we also get a few Southern Right Whales, and even some of the elusive Blue Whales.

During the winter months, these beautiful creatures migrate all the way from Antarctica to spend their time in the comparatively warm, pleasant waters of Australia’s west coast.

The whales themselves are just as you’d imagine them: magnificent, relaxed and intelligent behemoths that don’t usually mind humans, and are usually confident enough to put on the occasional display for our benefit.

While you’re watching, there’s also a couple of more playful marine species around. The dolphins of the Kimberleys are known for their friendliness, often frolicking and racing around the sides of our cruise liners.

The Snubfin, Bottlenose, and Humpback dolphins are pleased to make our acquaintance in the Kimberley, and despite somewhat dwindling numbers, a huge amount of work goes into their conservation from local university research and wildlife groups.

Australia is known for its rich variety of small and large animal life. On display nearby are elusive Echidnas (which are notoriously shy and hard to spot), a host of marsupial mouses such as the Bilby, multiple types of bats and flying foxes, and too many subspecies and similar small beasts to name.

Most of these are nocturnal, however much like wallabies, a few can be seen sneaking about when the light begins to fade. Keep your eyes and ears peeled!

If you haven’t heard of them, Dingoes are the closest thing that Australia has to a wolf. They’re dogs that have been trapped on our island for so many generations that they’ve diversified into a separate species. They howl instead of bark, and look a little different, but they’re definitely still more dog than wolf.

They’re seen as a pest by some and a nuisance by others, but they’re still majestic creatures that form a large part of our ecosystem. A word of caution though: they might look like dogs, but they’re wild animals. Don’t get close, only look from afar.

Snakes, crocodiles, and lizards. Oh my!

You’re bound to see a few gigantic Goannas in your treks across the Kimberley, which can grow up to several metres long, and love to bask on the warm rocks of the canyons we travel down. While you’re looking, you might even bump into one of our crocodile chums, which are the primary reason that we advise you to keep to the designated swimming spots if you’re looking to cool off under the summer heat.

A little less likely, but certainly worth looking for, are the other little creatures running around underfoot. There’s a plethora of (mostly harmless!) snakes and lizards scuttering about, including the absolutely stunning, world-famous Frill-Necked Lizard to keep track of.

Wildlife a-plenty in the Kimberley

We have no doubt you’ll come across some beautiful wildlife during your Kimberley Cruise. Whether it be the mighty crocodile, a flock of colourful birds, elusive echidnas or a stunning pod of dolphins, you’re in for a treat, having the best spot in the house for a show of Australia’s marvellous and thriving ecosystems.