16 May Protecting the Kimberley’s Horizontal Falls

Posted at 10:28h in Uncategorized by Ross Quigly
0 Likes 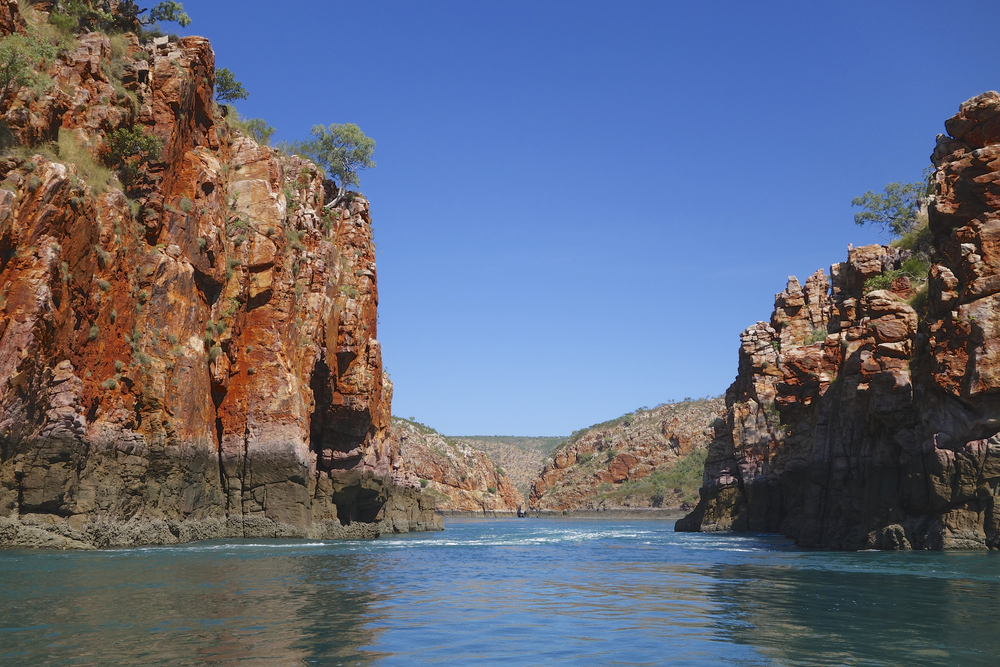 The Horizontal Falls might not be waterfalls at all, but they are one of the Kimberley’s biggest icons. A pair of stunning breaks in the McLarty Range approximately 300 metres apart, they are home to one of the most phenomenal tidal events in the world – as tides of up to 10 metres squeeze through two tiny inlets.

The first and more seaward of the gaps is approximately 25 metres wide, whilst the second and more spectacular gap is approximately 12.5 metres wide. Each year, tens of thousands of tourists flock to see intense tidal currents hurtling through these two narrow coastal gorges, creating a horizontal waterfall effect as water banks up against one side of the narrow cliff passage, to be repeated again on the turning tide.

On a King tide, the waterfalls can be up to 5 metres high.

The McLarty range itself is approximately 1.8 billion years old, comprised of sandstone, quartzite, siltstone, shale and dolomite with abundant stromatolites. Whether seen by seaplane or by boat, the Kimberley’s Horizontal Falls is a sight that every nature lover must see. A unique experience, it demonstrates the awesome power of the Kimberley tides, and without a doubt, it must be protected.

In 2011, we waited with baited breath to learn the fate of the area surrounding the Kimberley’s spectacular Horizontal Falls. Mining company Pegasus has begun exploration drilling nearby, and had put forward proposals for a copper mine directly adjacent to the Falls. Thankfully, people power got the better of the proposal, and in 2012, exclusion zones were introduced by the state government.

Despite the ban, however, the Kimberley region has been in constant fear that one day, open-cut mining will be a reality. Horizontal Falls and the surrounding area is rich in iron ore and copper deposits, and a copper mine would threaten to leach acid sulfate into the surrounding ocean. Not only would this mean total devastation for this unique landmark, it would be an end to the $20 million local tourism industry.

David Attenborough has described Horizontal Falls as “one of the greatest natural wonders of the world”. The falls, the surrounding reefs and nearby islands are pristine, richly biodiverse and stunningly beautiful, so to know this could one day be ruined is heartbreaking and harrowing.

Thankfully, the fear may now be gone, thanks to a move by the Liberal-National Government.

In late 2015, it was reported that draft plans for land management in and around the Kimberley’s Horizontal Falls had been submitted to the Liberal-National Government. The plan included proposals for two marine parks and a national park, north-east of Derby.

The area is on Dambimangari country and is of significant cultural value. As such, the parks will be jointly managed by Dambimangari traditional owners and the Department of Parks and Wildlife.

What this means for protection

With limited commercial fishing or extractive activities currently occurring in the area, the plan for a world-class Marine Park creates the opportunity to put an end to destructive activities such as benthic trawling and oil and gas extraction. Marine Protection has been recognised globally by scientists as protecting 30-50% of the area in marine sanctuaries – areas for marine life to feed and breed without interference to habitats such as mangroves, fringing reefs and seagrass beds.

To experience the now-protected wonder of the Horizontal Falls, there are a number of tours you can take. For those pressed for time or perhaps considering the budget, our True North cruise is the ultimate single week voyage. Not only will you experience the magnificent Horizontal Falls, you’ll enjoy the King George Falls, the Hunter River, the Prince Regent Falls and Montgomery Reef.

Making your way past Cockatoo and Koolan Islands, you’ll be introduced to the colourful histories of both before experiencing the incredible power of the region’s huge tides in an exhilarating ride. To top it off, you’ll climb aboard an air-conditioned helicopter for a view of the falls that very few get to experience.

What are you waiting for? Experience for yourself why Horizontal Falls is worth protecting and enquire about a cruise today.