Why Everyone Should Experience A Wet Season Adventure in the Kimberley

Posted at 22:35h in Uncategorized by Ross Quigly
0 Likes

The Kimberley is a tropical monsoon climate, defined by a distinct wet season and dry season. A broad generalisation suggests that the wet season falls between November and April and the dry season is present May to October.

Traditionally, most travellers choose to visit the Kimberley region during the dry season, which is characterised by clear blue skies, easterly winds and balmy days. The weather is reliable, the roads are open and the nights are cool and pleasant. But before you decide to wait until the dry season, consider the benefits of a visit during the wet season.

A Kimberley holiday offers one of the world’s most unique wilderness experiences, and if you’re a fan of adventure or simply want to experience something out of the ordinary, the Kimberley wet season should be on your holiday wish list. Covering nearly 423,000 square kilometres, this ancient region has fewer people per square kilometre than almost any other place on Earth and during the wet season, there’s even less!

The wet season brings with it thriving wildlife, thundering waterfalls, overflowing rivers and the most magnificent night performances you’ll ever witness. Aboard a cruise you will experience swollen billabongs, unexplained rock art, monstrous barramundi and freshly caught oysters. Witness amazing tidal movements and visit places precious few have been privileged to see. Kimberley cruising adventures take you on a journey like no other, and whether you choose a 8, 10 or 14 night cruise, you’ll be taken to an entirely different world. One you won’t believe exists.

What makes the Kimberley like no other place on earth? 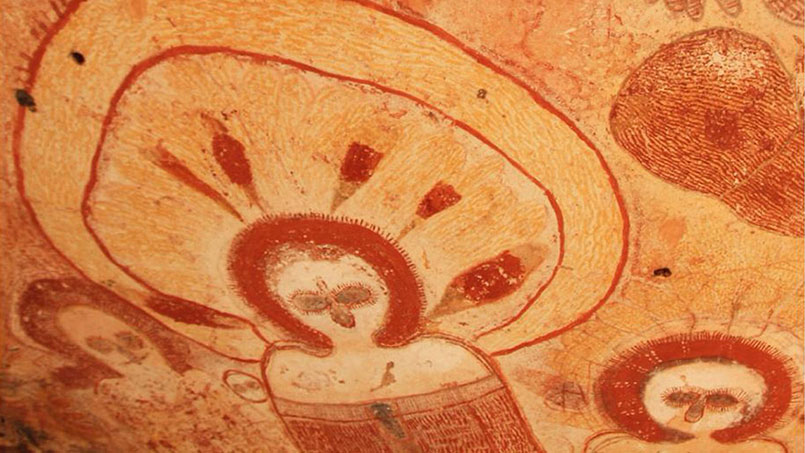 The Kimberley has an exotic history, being one of the earliest settled parts of Australia. The first arrivals are thought to have landed around 40,000 years ago from the islands of what is now Indonesia, but rock paintings suggest inhabitants much earlier.

The Kimberley region is home to hundreds of thousands of rock art paintings and drawings known as Bradshaw or Wandjina rock art. It’s arguably some of the oldest rock art in the world, with evidence suggesting it dates back as far as 60,000 years ago.

Rock paintings can provide information about how and when people arrived, explain the environment at the time and give good insight into how the area has adjusted to changing climatic conditions. Common rock art motifs include markings that depict human interaction with the landscape, complex records of Aboriginal life, clan estates and “creator beings”. Many of these fascinating rock paintings are only accessible by boat and are protected and preserved to ensure enjoyment for many years to come.

The Kimberley is also a region of spectacular natural beauty. Its coast is one of the last remaining unspoilt coastlines and one of the most pristine marine areas on Earth. Horizontal Falls, just one iconic Kimberley highlight, is considered one of the greatest natural wonders of the world.

As for flora and fauna, the unique and often giant Darngarna fan palms are incredible and the 72 native mammal species, 295 bird species, 178 reptile species and 51 amphibian species will certainly keep you busy with the binoculars.

What makes the Kimberley special in the wet?

The wet season can be unpredictable, but for most locals, it’s the favourite time of year. The weather’s hot and the roads often flood, but if you’re cruising, who cares? A cruise offers a cooler experience and a wet adventure that’s unforgettable. The early and late stages of the wet season are the best times to travel, when the skies are full of spectacular lightening shows, the region is lush and green and the waterfalls are at their best.

Onboard the True North’s 10-day wet season adventure, you’ll be introduced to the emotive beauty of the wet season.

During the wet season, Horizontal Falls is at it’s most powerful and there’s no better way to experience them than with an optional helicopter flight over the falls.

Often listed as one of Australia’s best beaches, Silica Beach is at it’s most refreshing during the wet season. Featuring crystal clear water, it’s part of the Kimberley’s remote Buccaneer Archipelago and the white sands are created from shell and coral fragments. Silica Beach is only accessible by boat.

At the majestic cliffs of Raft Point, the well-preserved Wandjina paintings offer wonderful insight into the people who once inhabited the land. You’ll also observe spectacular views over Doubtful Bay and Steep Island.

Located on the Prince Regent River, the King Cascade waterfall beautifully cascades over terraced rock formations. Your cruise can run right along side it, getting you up close and personal with this spectacular sight.

The Hunter River has it all – dense mangrove forests, rainforest encrusted mountains, man-eating crocodiles, mud crabs, fishing and bird watching. The River is a sight to be seen all year round, but it is so full of life during the wet season that you’ll never want to leave it.

Renowned for its big barramundi and even bigger crocs, the Mitchell River is a must for any keen fisherman. You’ll also be given another opportunity for an incredible helicopter flight of the magnificent Mitchell Falls.

Yet another river and more falls to enjoy. This is what the wet season is all about. You will never forget the ferocious sound of the powerful falls as they plunge into the water below – a natural spectacle that will stay with you forever.

The Kimberley wet season is dramatic and beautiful, and a must for any person looking for that ‘something special’ holiday. Sure you might get wet, but a few damp clothes is a minimal sacrifice when you consider the natural spectacle that awaits you.