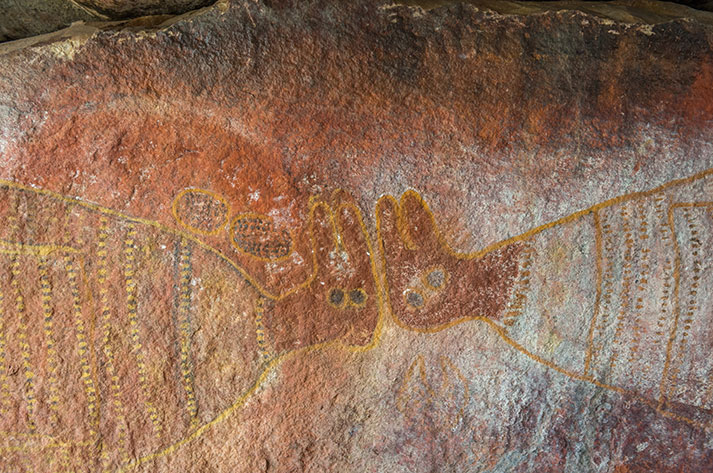 Posted at 17:35h in Uncategorized by Ross Quigly
0 Likes

The Kimberley region is known for its beautiful natural sights and wildlife, but did you know that the northernmost area of Western Australia has some of the highest concentrations of Aboriginal rock art in Australia? Roughly the size of California or three times the size of the UK, the Kimberley offers incredible opportunities for viewing Aboriginal culture and history.

Indigenous rock art in the Kimberley is so abundant that experts believe it may take several generations to record. While dating the art is a work in progress, it’s likely to be tens of thousands of years old. It could potentially be among the oldest in the world, as evidence suggests that Aborigines first arrived in the region 50,000 to 60,000 years ago. As well as the many known rock art sites, there are probably many more that remain undiscovered due to their remoteness.

Rock art offers an important cultural and historical legacy by providing an insight into the cultures of early Aborigines. It allows us to understand the movement of humans and their societies in ancient times. As the traditional owners, Aboriginal Australians are the custodians of these rock artworks.

There are two well-known categories of Kimberley rock art: Wanjina and Gwion. Many of the known rock art sites are located in around rivers and in caves or rock overhangs that provide natural shelter from the elements for the art works.

Wanjina (also called Wandjina) art dates back at least 4,000 years and was first recorded by explorer George Grey in 1837. Wanjina art features creator or spirit ancestors in human form, with headdresses or halos, mouthless faces, and very large, round eyes between beak-shaped noses. These figures are usually painted with outward-pointing lines resembling lightning. The creator ancestors are thought to control the rains and storms of the wet season, and these ‘creator beings’ are said to reside in the rock itself or have left their bodies in the rock.

The Wanjina tradition endures today and initiated elders sometimes refresh the figures by repainting them so as to maintain the power of the Wanjina.

Where to see Wanjina rock art

You can view Wanjina art in the Glenelg River area, where there are several sites first recorded by the explorer George Grey in 1837. There are also well-known sites on the Drysdale River, at Eagle Rock and Donkey Creek, the Windjana Gorge in the Napier Range, and Galvan’s Gorge on Gibb River Road. In Doubtful Bay, you can also find a gallery perched high on the side of Raft Point. Wanjina art work sites have also been found in the many coastal caves on Bigge Island, off the coast of the Kimberley region.

Due to the remoteness of many of these rock art sites, one of the best ways to travel to them is by boat. There are many cruises operating in the Kimberley region which visit Aboriginal rock art sites. The Great Escape – Kimberley Classic Adventure 13 night Kimberley cruise visits both Bigge Island and Raft Point, allowing you plenty of time to explore and get to know the art, as well as the other spectacular locations visited on the cruise.

Gwion rock art features animal figures and graceful, elongated human forms with different accessories such as spears, dilly bags, ornaments, and boomerangs. Gwion rock art is also known as Kiro Kiro or Djaeneka Djaeneka depending the area and the language spoken, or Bradshaw paintings after the pastoralist Joseph Bradshaw who discovered and sketched the Roe River artworks in the 1890s.

This type of rock art – which dates back at least 17,000 years – often uses different colours, including red, mulberry, and black.

Where to see Gwion rock art

You can view Gwion art by visiting the sites located on the Roe River in the northwest of the region, as well as along the Drysdale River and at Mitchell Falls.

While significantly different, both Wanjina and Gwion rock art clearly depict the lives of the tribes who have lived, hunted and survived the harsh terrain of the Kimberley region. Odyssey Expedition’s 9 day cruise from Mitchell Falls to Broome offers the best of both worlds, allowing you to see the two types of rock art. It visits Gwion rock art at King’s Cascades and a Wanjina gallery at Raft Point.