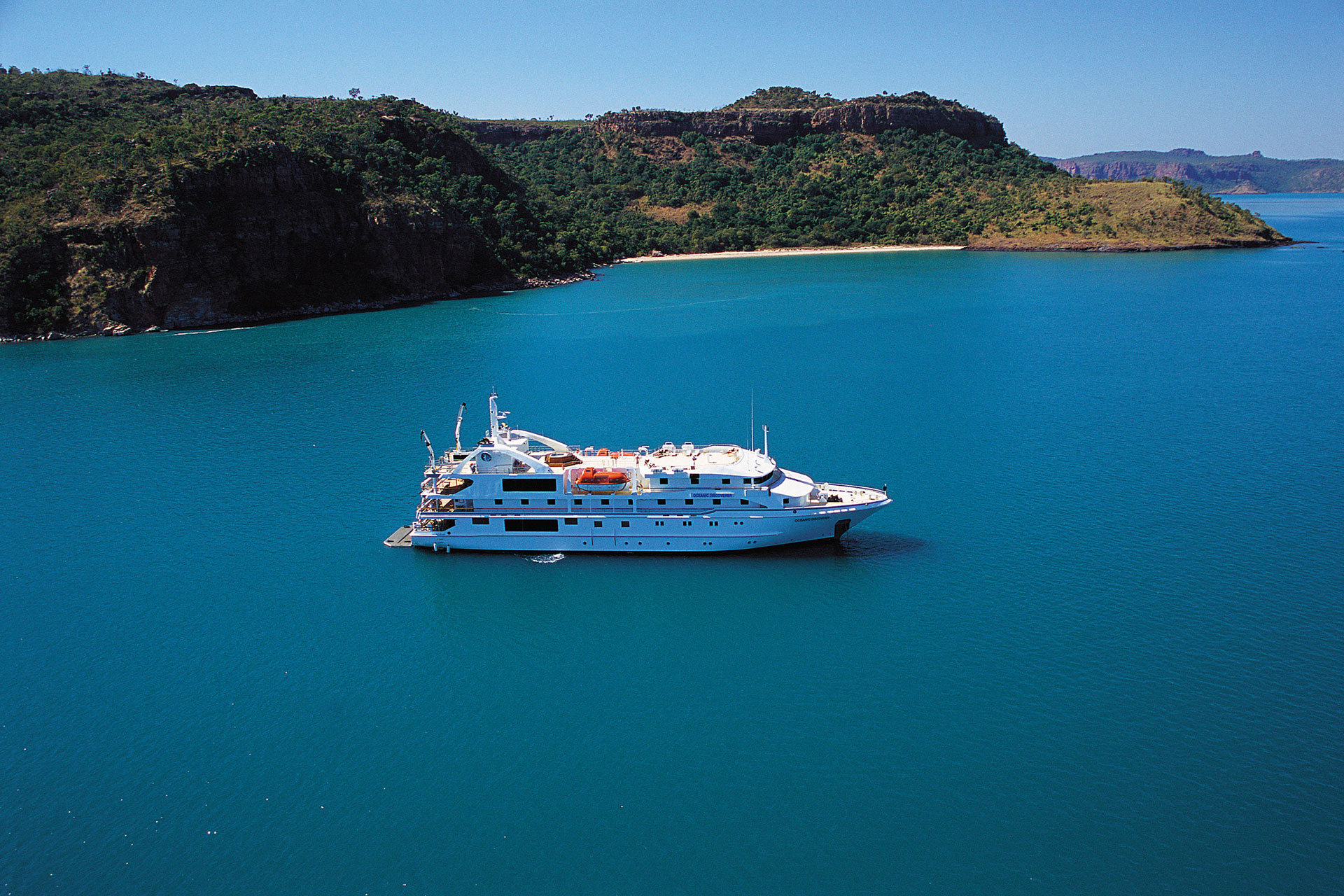 Broome to Darwin (or itinerary can be reversed)

Arrive Broome, Embark Ship
Arrive in Broome and be transferred to your expedition ship where you can settle in to your well-appointed suite or stateroom. Get to know your fellow guests, and Expedition Team during a Welcome Dinner tonight.

Adele Island, Buccaneer Archipelago
Cruise to Adele Island and board your ship’s Zodiacs with your Expedition Team to explore this remote and isolated island. The island is classified by BirdLife International as an Important Bird Area for sea birds and waders and is an important habitat for breeding frigatebirds, brown boobies, cormorants and Australian pelicans. The island is surrounded by Adele Reef which is home to soft and hard corals and a large variety of marine life including reef sharks and stingrays.

Talbot Bay, Horizontal Falls
SIGNATURE EXPERIENCE
Subject to tidal conditions, embark on a ride through Horizontal Falls on a high-powered fast boat.
Cruise through to Talbot Bay, known for its massive 12-metre tides that create an amazing spectacle, the incredible Horizontal Falls. David Attenborough described these impressive tides as “one the greatest natural wonders of the world.” Later, take a Zodiac cruise through Cyclone Creek to see dramatic folding in the rock formations and keep an eye out for native birdlife and saltwater crocodiles.

Raft Point, Doubtful Bay, Montgomery Reef
SIGNATURE EXPERIENCE
Embark on an unforgettable adventure today as the magnificent Montgomery Reef ‘rises’ out of the ocean as the tidal waters cascade down into the surrounding channels. Board your Zodiac to experience this natural phenomenon up close and discover the reef’s diverse marine life. Keep an eye out for unique bird life and turtles who may pop their heads up from time to time.

Travel ashore at Raft Point to visit an ancient Wandjina rock art site, gaining a unique perspective from a local Indigenous guide (when available). The Wandjina is known as a living art tradition as these stunning figures are ritually repainted, however scientific estimates show that the original depictions date as far back as 5,000 years. These figures, identified as having a distinctive plate-like face with no mouth, are said to show a powerful creator being. Later cruise through Doubtful Bay, an amazing location for whale watching during the season.

Careening Bay, Prince Regent Reserve
Visit Careening Bay, the home of the historic Mermaid Boab Tree, where in 1820 Lieutenant Phillip Parker King used the area’s massive tides to beach his damaged ship, the HMC Mermaid to repair a leak in the ship’s hull. One of King’s crew members carved the ship’s name in a Boab Tree that overlooks the bay, and today you have the chance to see for yourself a living piece of Australian colonial history. Continue on to explore Prince Regent Nature Reserve, a protected area that is only accessible by boat and is recognised as a national biodiversity hotspot. Spend time in the picturesque area of Hanover Bay and perhps visit St George Basin by Zodiac to see saltwater crocodiles and numerous marine creatures if tidal conditions permit.

Prince Frederick Harbour, Hunter River, Mitchell Falls
Arrive at Prince Frederick Harbour, home to soaring red cliffs and mangroves. With its extreme tides and pristine ecosystems, there is an incredible range of wildlife to discover here including saltwater crocodiles, mudskippers and a plethora of bird species including kingfishers, egrets, herons and the majestic white-bellied sea eagles. Board a Zodiac with your Expedition Team to explore the Hunter River, then visit Naturalist Island where an optional helicopter flight to Mitchell Falls departs (own expense, guests are advised to pre-register interest).

Bigge Island
SIGNATURE EXPERIENCE
Bigge Island is well known for its Indigenous rock art, which was created by the Wunambal people.

Discover Bigge Island today, off the coast of the Kimberley, approximately six kilometres from the mainland. In caves throughout the island, see examples of first contact art depicting European tall ships dating from the 15th to 18th century. Learn how the mysterious Wandjina figures are unique to the Kimberley, to the Wunambal, the Wandjina is the supreme Creator and a symbol of fertility and rain who comes to the Kimberley every wet season to bring life. This belief in a single Creator or God is unique to the Kimberley. Many of the Wandjina art sites are still repainted each year as a tradition which reconnects the Wunambal to their Creator. Having been repainted annually for the past 5,000 years, this is thought to be the oldest continuous sacred painting tradition on the planet.

Vansittart Bay, Jar Island
Join your Expedition Team to take an informative walk across salt flats at Vansittart Bay to view the wreckage of a US Air Force C-53 which crash landed on the beach during World War II. The C-53 is a modified civilian Douglas DC-3 airliner, an aircraft used extensively during World War II by the Allies. Later, visit Jar Island and see examples of the Kimberley’s mysterious Gwion Gwion (formerly Bradshaw) paintings, dating back some 20,000 years. These stylised figures give impressions of movement, depicting people involved in ritual dancing, complete with elaborate clothing including tassels hanging from the arms and waist. The style of these paintings is very distinctive.

Koolama Bay, King George River And Falls
SIGNATURE EXPERIENCE
While exploring the King George River, the highlight is sure to be King George Falls, plunging 80 metres over a magnificent sandstone cliff. Get up close to this spectacular cascade and learn how it turns to a raging torrent during the monsoonal wet season.

Wake up this morning on the Kimberley Coast as your ship cruises into Koolama Bay. Once known as Cape Ruilhieres, hear how this spectacular harbour was renamed following the Japanese bombing of the MV Koolama in 1942, while carrying 91 passengers, 89 crew and a cargo of war supplies destined for the Australian Army at Wyndham. Arrive at King George River and board your ship’s fleet of Zodiacs with an Expedition Team member. Meander through the gorge system, travelling 12 kilometres upstream to discover hidden mangrove-fringed coves and 100-metre-high red-cliffs.

At Sea
Enjoy a full day to relax at sea and take in a presentation from your Expedition Team. Learn about the fascinating ecology of Australia’s most remote coastline, one that is dominated by some of the most dramatic tidal conditions on Earth. Hear stories of the rich World War II history and get prepared to discover ancient Indigenous culture that dates back for tens of thousands of years. Take time to relax as you feel the pleasant pristine air of the Timor Sea fill your lungs and then take advantage of the Open Bridge policy for the chance to make acquaintances with your ship’s Captain. After dinner tonight, make your way to the Lounge for the evening entertainment.

Disembark Ship, Depart Darwin
After breakfast, be transferred to the airport or your Darwin hotel.

Interested in this cruise? Please fill out your details below and we will reply to you shortly regarding availability and a free quote.

To speak to our team at Kimberley Cruise Escapes that have been on dozens of cruises and know the vessels first hand to ensure you’re Kimberley adventure will be the trip of a lifetime!